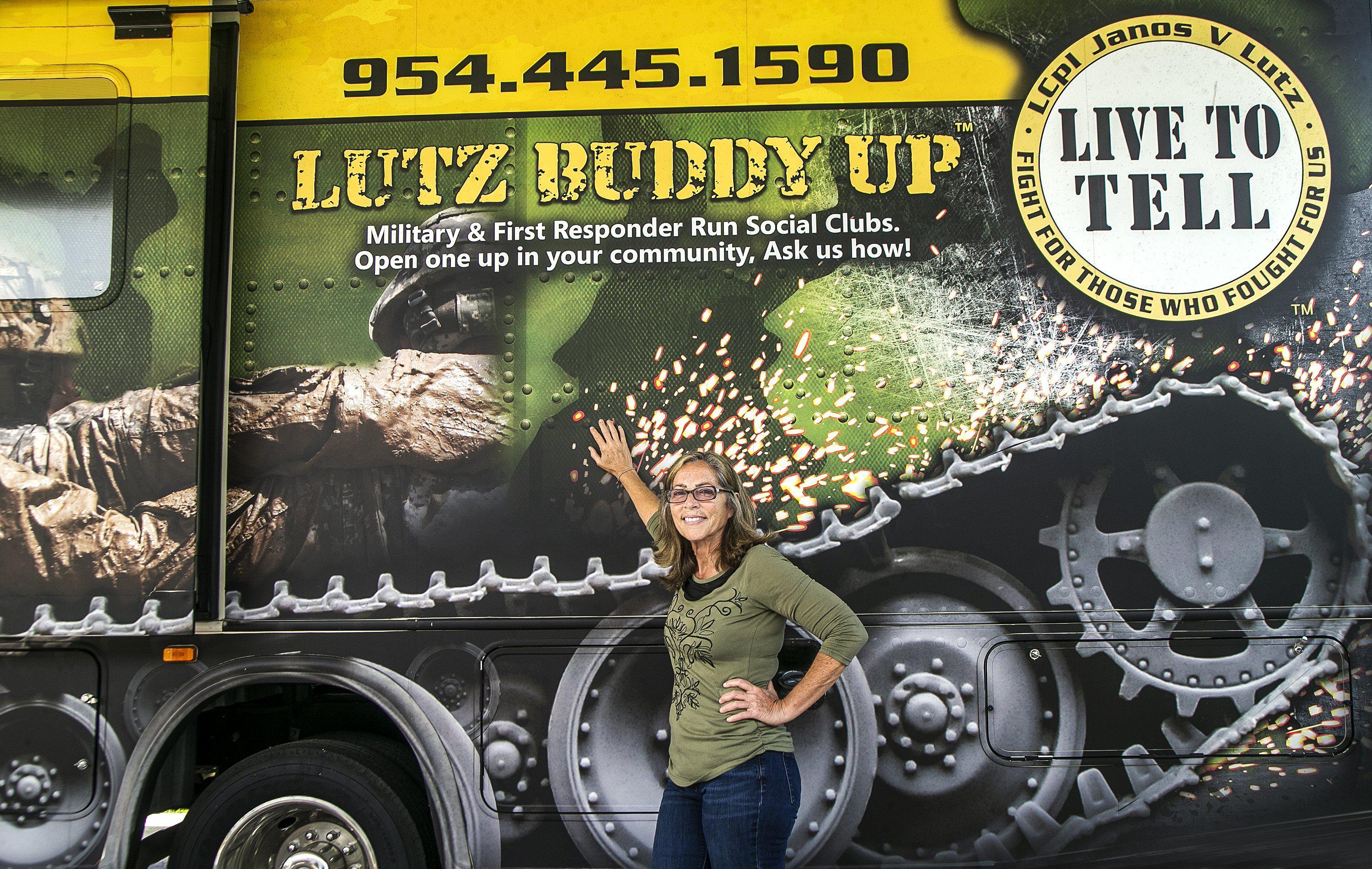 Janos “John” Lutz was 19 when he enlisted in the Marine Corps out of high school with the goal of doing his part for his country in the wake of the 911 terrorist attacks.

As he hoped, he was deployed to the front lines in Iraq.

Janine Lutz remembers the first time her son called her from the war zone. He was serious as he told her what he had seen that day – a car bomb blast.

“We were the first to arrive at the scene. There were body parts everywhere,” her boy said cautiously as he related some of the details. He said he was fine that it was all part of his ministry. He was a Marine now, and that’s what Marines do.

But at the end of the call, just before he hung up, he suddenly lowered his voice to barely a whisper, so low that no one could overhear.

“Be careful what you wish for,” he said softly.

It was the first crack in his voice she’d heard since he’d joined the military, a chilling reminder of how real her son’s desire had become.

But as brutal as his time in Iraq was, it was nothing compared to his next assignment in Afghanistan, where he saw combat action in one of the war’s largest military offensives. During that surgery in July 2009, his best friend, Lance Cpl. Charles Sharp was killed. Lutz and his comrades from Echo Company’s second platoon dragged Sharp’s body in hopes of getting it to the medical helicopter, but Sharp bled to death in their hands before they could get him help. Lutz saw far more carnage, which his mother only later learned about from some of the Marines her son served with.

When Lutz returned to the States a year later, he was tormented by nightmares and the pain of injuries sustained in a battlefield explosion. At Camp Lejeune, NC, he was prescribed a variety of medications. By the time he returned home to Davie, Fla., he had attempted suicide — and he was addicted to anti-anxiety drugs.

He tried to wean himself off the drugs, and for a short time he appeared to be on the mend. But 18 months later, in January 2013, he overdosed on morphine and a strong tranquilizer, leaving a note on his bedroom door that read, “Do not resuscitate.”

About 17 veterans commit suicide every day in the United States. In Florida, 550 veterans died by suicide in 2019, the latest statistic from the Florida Department of Veteran Affairs.

For Janine Lutz, the answer lies in veterans connecting with other veterans in their local community.

She founded the Cpl. Janos V. Lutz Live to Tell Foundation, which offers programs for veterans with PTSD. Each month, she hosts a Buddies Up Broward chapter meeting where veterans and first responders (who also suffer from PTSD) help each other. She has traveled the country in an RV and organized similar meetings. She has also developed an app for veterans to connect with other veterans.

“People think they have an idea of ​​what death and destruction looks like, but until you actually see it, it’s a whole different game,” she said.

“These veterans think they are weak when they reach out. No, by reaching out, you could save that person you are reaching out to.”

The US Department of Veterans Affairs has been working to address the suicide crisis among veterans and members of the military since the late 2000s, when rates began to rise.

The epidemic has prompted the VA to try new approaches and even turn to experts around the world for solutions. Still, many veterans and their families wonder how the VA treats post-traumatic combat stress syndrome and other war-related injuries.

“When Johnny came home, he wasn’t the same person. The war had changed him. I didn’t understand what was happening because he buried all his trauma and anger in a mind-numbing haze of prescribed medication,” his mother said.

It was only after her son’s death that Janine learned that VA doctors prescribed her son a drug cocktail so common that members of the military community she spoke to dubbed the therapy “zombie dope.”

A pill helped him fall asleep. Another pain relieved. Another pill was for anxiety. Another was for his depression. The VA prescribed benzodiazepines, which his own medical records indicated he was not allowed to have. One of the withdrawal symptoms from benzodiazepines is suicidal ideation.

“It’s just criminal how the VA gives our veterans a pill for every symptom. For them, the answer to their problems is a pill – rather than getting to the root of the problem. Let’s process what they went through, the hell they went through on the battlefield, help them process it through other war fighters, not with a psychiatrist who’s never seen a battle.”

According to Brown University’s Watson Institute, between 1.9 and 3 million American soldiers served in Iraq and Afghanistan, and many of them were deployed more than once.

Countless soldiers returning home from battle suffer from what are known as “invisible war wounds”, post-traumatic stress disorder (PTSD) and traumatic brain injury (TBI). The military has long struggled with how to treat these brain disorders, largely because they are difficult to detect and diagnose. Many soldiers suffer the psychological effects without knowing what is causing their symptoms, including depression, anxiety and suicidal thoughts.

Studies show that the majority of people with PTSD who use PTSD medication respond well to antidepressant medication when used properly. The drugs can improve mood, help patients manage stress, and relieve symptoms of PTSD.

But Cole Lyle, a Navy veteran who served in Afghanistan and now heads Mission Roll Call, a veterans advocacy group, said drugs shouldn’t be at the forefront of treating veterans. The agency has spent too long on what its doctors and clinicians call “evidence-based” research and treatments, mostly focused on drugs and psychotherapy, he said.

The VA “considers the suicide problem among veterinarians as a mental health issue, which is a mistake,” Lyle said. “Looking at it through the lens of mental health disregards all other factors that got the veteran to get to this point in the first place.”

Lyle knows what despair is because he has considered taking his own life.

“In 2014, when I came back from the war, I didn’t have a job. I lacked the sense. I felt alone,” he said. “That was a low point in my life. But it forced me to get involved in veteran politics and politics.”

In April, VA officials announced plans to provide more than $50 million in suicide prevention program grants to community groups and other grassroots organizations to help veterans.

In 2020, Congress passed sweeping bipartisan legislation aimed at preventing veteran suicides. Since then, funding for suicide prevention programs has steadily increased from $206 million in 2019 to $598 million in 2022.

“The traditional model of medical care for veterans does nothing to ensure that their quality of life is sustainable and stable,” said US Rep. Debbie Wasserman Schultz, a Broward County Democrat who chairs the House Subcommittee on Veterans Affairs . “We are now focused on funding all of health – not just medicine.”

In recent years, the state of Florida has also redirected some of its funding to community-based programs that are better able to reach veterans with PTSD and brain injuries.

“We’re getting off drugs and we have other therapies now,” said Steve Murray, spokesman for the Florida Department of Veteran Affairs. “We have hyperbaric oxygen therapy, dog warriors, equine therapy, photosensitivity therapy. We’re now using unconventional ways to address the issue and we’ve had some success with that.”

But he and others acknowledge that many veterans don’t take advantage of programs. Military personnel are often reluctant to seek help and there has historically been distrust of the VA.

“Many veterans I speak to do not use VA and have negative perceptions of VA. There’s no way to counter these perceptions — they’re trying to use the VA but are frustrated by the sheer volume of communication just to make an appointment,” Lyle said.

In Florida, Gov. Ron DeSantis recently launched a suicide prevention program for veterans and expanded career and training opportunities for military personnel. Among other things, the state has staffed its 211 information hotline with veterans who are accredited to help other veterans. Each county in the state also has a Veterans Affairs Coordinator, and each VA medical center has a Suicide Prevention Coordinator who conducts public relations.

But the state is huge, and many veterans retire to Florida from other states without registering for Florida VA benefits.

“In my opinion, we still have a crisis in the state of Florida. We still don’t know who all the veterans in Florida are. We need to reach them,” said Clara Reynolds, CEO and president of the Tampa Crisis Center, which funds suicide prevention programs for veterans across Florida.

COVID-19 also slowed the reach, although it didn’t quite stop, said Murray, a retired U.S. Air Force lieutenant colonel who has worked for the state’s Bureau of Veterans Affairs for 16 years. Some therapies are still being offered remotely via telemedicine, which has connected veterans to programs in more rural areas of the state, he added.

Hotels are slowing down their price increases

Carolyn Hax: Picky sister-in-law is ‘crazy to be around’ Tips for getting started with sailing